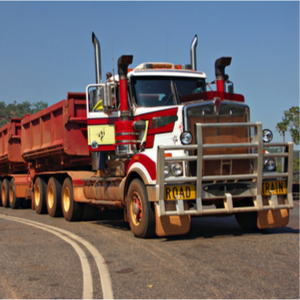 Here at Express Truck Tax, we dug up some truly surprising trucking industry facts that you need to know about.

Enjoy this list of historic world firsts in the trucking industry.

It is widely reported that the first semi-truck was invented in 1898 by Andrew Winton.

He used the first semi-truck to haul his automobiles and avoid putting wear and tear on them before delivery.

At this point in American history, there were no interstate systems and most roads were still unpaved dirt. In fact, in 1900, only 4% of roads were paved.

Traveling by road was much more difficult and most freight was transported by train. However, over time, trucking became the preferred method to reach rural communities that were not being served by trains.

The trucking industry truly exploded as networks of paved roads expanded and the interstate system was begun in 1956.

The fastest semi-truck in existence is actually hard to nail down. There are many kinds of trucks competing for the title: standard diesel, electric, and one insane jet-powered trucks.

The fastest standard diesel semi-truck we could find is Volvo’s Iron Knight. They only made one, created specifically to go as fast as possible.

But just take a look at these stats about the fastest diesel semi-truck:

The new Tesla electric semi-truck is set to hit roads in 2020. Love it or hate it, this semi-truck is seriously fast, and it’s actually going to be available to the general public.

Check out what Tesla says about their electric semi-truck:

Last is the seriously insane, jet-powered Shockwave custom Peterbilt. This semi-truck is powered by two huge jet engines that shoot massive flames and propel the truck to a top speed of nearly 400 mph.

Check out these other stats about the fastest jet-powered semi-truck:

Their trucks are outfitted with massive grill protectors meant to plow right through kangaroos and other animals that get in their way.
But this Guinness-World-Record-setting road train is the craziest thing we’ve ever seen.
With a single Mack truck, John Atkinson hauled 153 trailers — for about 500 feet. It’s still pretty insane though.

The most expensive semi-truck is this custom Mack truck. It’s another example of a very impractical truck design.

Built for the Sultan Ibrahim Ismail of the Malaysian state of Johor who needed to drag his speedboat, this thing reportedly cost over $1 million.

Check out these over-the-top stats about the most expensive semi-truck:

We don’t want to know what the taxes would cost on a truck like the Sultan’s. One thing is for sure, the Sultan doesn’t have to pay HVUT and IFTA taxes. But you do.
Fortunately, Express Truck Tax is here to give you service fit for a king.