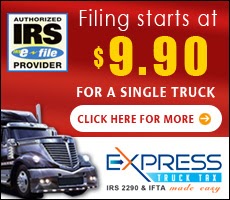 Although the HVUT, or the Heavy Vehicle Use Tax is imposed annually, it is also mandatory for vehicles to file the IRS Form 2290 after the first use month. The typical tax year for heavy vehicles begins on July 1 and ends on June 30. For vehicles that are first used during the tax year, a prorated tax must be paid for the months that the vehicle was in use. This can be done with the IRS Form 2290 and the easiest way to file the 2290 is through ExpressTruckTax.com

When a new vehicle is placed in service, the Form 2290 must be filed by the last day of the following month. The tax will be prorated based on the number of months the vehicle will have been used during the tax year. If a vehicle was used during any part of a month, the tax will be calculated for that month as a whole. For example, if a vehicle was used on November 28th, it will be taxed as though it was used the entire month. So vehicles that were placed in service during the month of November will need to file HVUT using the 2290 by December 31, and the tax will be based on 8 months, instead of the full year.
All you will need is some basic business information, EIN, VIN and Gross Weight of the Vehicle to complete the return.  Then you will transmit the return to the IRS and you will receive your Stamped Schedule 1 in just minutes!

For more information or to get started today, visit ExpressTruckTax.com or contact our Express Tax Support Center in Rock Hill, SC at 704-234-6005 or email us at support@ExpressTruckTax.com.  We have Spanish Support too!